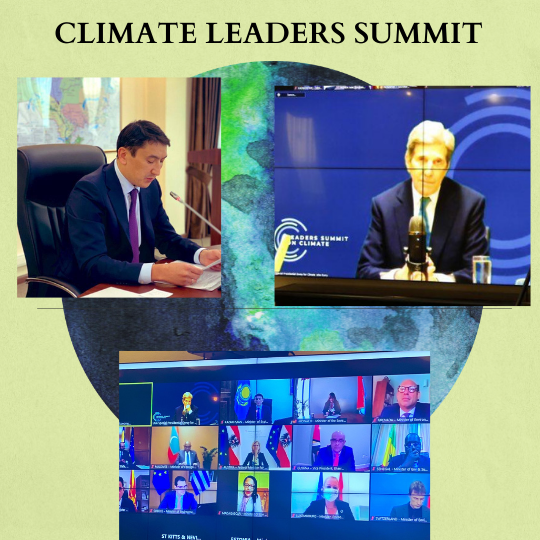 Such a proposal was voiced by the Minister of Ecology, Geology and Natural Resources of the Republic of Kazakhstan, Magzum Mirzagaliyev, during a round table at the Climate Leaders Summit with the participation of the U.S. Special Presidential Envoy for Climate John Kerry.

Mirzagaliyev spoke about the measures taken by Kazakhstan to achieve carbon neutrality. He noted that recently adopted Environmental Code creates conditions for the implementation of the process for adaptation to climate change in the most vulnerable sectors. Moreover, he expressed the country’s readiness to participate in the US grant programs for green financing. It is necessary for implementation of the most ambitious scenario of deep decarbonization according to the Concept of the country’s low-carbon development until 2050. These measures will result in a 71% reduction in emissions.

In general, Kazakhstan is the first country in the CIS that ratified the Paris Agreement and is a leader among the Central Asian countries in the development of a green economy. Therefore, he put forward an initiative to create a Regional Hub in Central Asia on climate issues in Kazakhstan. The Hub’s activities would be aimed at uniting the efforts of the Central Asian countries in ensuring “green” economic growth in the region through the implementation of projects, technology transfer, knowledge exchange and support from international financial institutions. Kazakhstan is ready to support the implementation of the global climate change agenda,” the minister added.

Return to News Return to Homepage