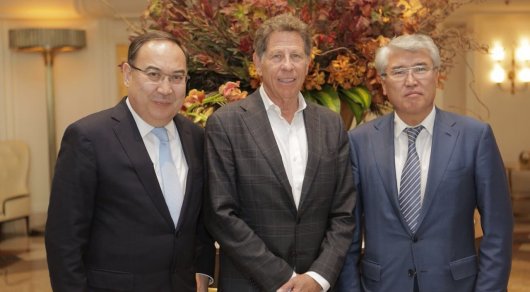 Third in the energy sector is the electricity generation and distribution industry, but in importance to the economy as a whole, it is critical for the operation and development of all industries and commerce. Kazakhstan has 76 power stations, of which five are hydro-electric.

More than 85% of electricity generation is under private ownership, but the electricity distribution network is controlled by state-owned KEGOC (Kazakhstan Energy Grid Operating Company). The total installed capacity of power plants in Kazakhstan is 20,591 MW, with the largest production in Pavlodar and Karaganda regions.

Large power generators include ECE, Ekibastuz-GRES-1 and GRES-2, owned by the Kazakhmys Corporation; the major heat producers include ENRC’s subsidiary Aluminium of Kazakhstan, ArcelorMittal Temirtau, and Karaganda Zhylu. The Integrated Power Systems network between Russia, Kazakhstan and Central Asian states such as Kyrgyzstan, Turkmenistan, Tajikistan was created in 2002.

Major investment projects within Kazakhstan include a second power transmission line North South, runnin,000km between power stations in the north of the country to the south.

Kazakhstan is the focus of attention from international players in the renewable energy market, and the Government welcomes foreign investment in green energy projects. Wind, solar, biogas, biofuel and small hydro projects are all eligible for feed-in tariffs, and there is a stable legislative framework for such investments.

There will be an estimated US$2 billion invested in renewables by 2020. 10-15% of the land in Kazakhstan has average wind speeds of over 6 ms making this ideal territory for wind farms; one of the country’s power companies, Samruk-Energy, is building a wind farm that is forecast to produce 172 million kilowatt hours of electrical energy per year.

The 3,000 hours of sunlight a year in Kazakhstan has the potential to produce 2.5 billion kilowatts a year. Future Energy was the theme of EXPO 2017, hosted by Kazakhstan in the capital, Nur-Sultan.

The work continues on the premises of EXPO 2017 to develop an international centre for the development of green technologies and investment projects under the auspices of the UN, as proposed by President Nazarbayev in September 2015.

At Nazarbayev University, the EXPO Centre’s neighbour in Nur-Sultan, a new Centre for Energy Studies will take the development of Future Energy onwards.

Already, the forecast for inward investment in the renewable energy sector is over two billion dollars by 2020; with EXPO 2017 the investment level is set to rise. There are plans to build 13 wind plants, 14 hydroplants and four solar plants, and for the country to recycle a third of its waste to energy generation.

The largest solar power station in Kyzylorda province will be capable of generating 65 megawatt hours of electricity a year, and the first commercial wind farm in Akmola province could generate 172 million kilowatts of electricity a year, saving more than 60 milion tons of coal. Wind farms – because of the geography of the country, with its vast steppe – have the potential to produce 25 times more energy per year than Kazakhstan’s current production from hydrocarbons. Around 10-15% of the land has average wind speeds of over six meters per second, making Kazakhstan a prime candidate for wind energy. Solar energy potential is also enormous, with around 3,000 hours of sunlight per year generating a possible 2.5 billion kilowatts.

Return to News Return to Homepage